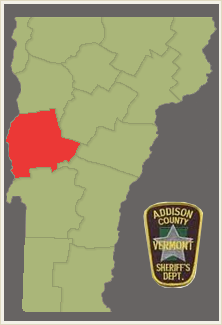 Sheriff Peter D. Newton grew up in Salisbury, Vermont and has resided in Middlebury for the last 28 years, a life long resident of Addison County.

Sheriff Newton was sworn in as the 41st Sheriff of Addison County on February 1, 2019, and has over 28 years in the public safety field.

Peter started as a Patrol Officer for the Middlebury Police Department in February 2003 and worked there until September 2013. Peter started working for the Addison County Sheriff's Department in April 2012, and worked his way from Deputy to Detective Sergeant to Lieutenant and finally Sheriff.

Prior to being in law enforcement Peter had 13 years in the Vermont Emergency Medical Field with the Middlebury Volunteer Ambulance Association . Peter was Advanced life support trained, a Crew Chief, Heavy Rescue Chief, Operations manager, Board member on the MVAA board of directors. Peter was also a transport medic for the Fletcher Allen Coordinated Transport team (FACT).

The Sheriff's Department does,