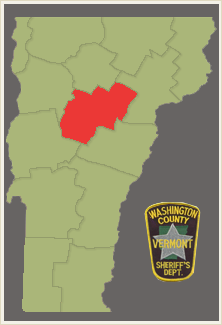 Sam Hill was born and raised in Hardwick, Vermont. Sam grew up working for his father, a local contractor/electrician and on area farms. After graduation from Champlain College, Sam began his career in law enforcement, taking a position with the Barre City Police Department, where he served for 20 years.

In July of 2004, Governor James Douglas appointed Sam to the position of Washington County Sheriff. Sam continues as Sheriff having been elected to the position in November of 2006 and 2010. As Sheriff he oversees a full time staff of 12 and part time staff of 30. Having only a small County Budget, Sheriff's Department's in Vermont are small businesses. The Sheriff is responsible for overseeing the business, law enforcement and human resource aspects of the Department.

By statute the Sheriff is responsible for the transportation of prisoners, mental health patients and juveniles, who are in the custody of the State. Sheriff's are also required by statute to serve civil process within the County. As Sheriff, Sam is also responsible for Court security at Supreme Court, the Superior Court of Washington Count, Criminal, Family and Civil Divisions, as well as Environmental Court. Sam also oversees patrol, security, and traffic control contracts for Sheriff's Department. As Sheriff Sam also interacts and coordinates with other State, Municipal and County agencies, in order to better serve the people of the County and the State. Sam also continues to teach Juvenile Law at the Vermont Police Academy.

Since becoming a police officer Sam has received many commendations and awards. On May 27, 2010 at the Annual Chief's and Sheriff's meeting the Vermont Sheriff's Association recognized him by awarding the William Graham Award, for his outstanding service to the enhancement of the mission of the Vermont Sheriffs' Association. On June 12, 2003, Sam was presented with the Commander's Citation Award from the Vermont State Police for outstanding investigative efforts and professional interactions in the Stratton homicide investigation. In June of 2002, Sam was named the American Legions Northeast Regional Law Officer of the year for 2001 and was selected runner-up for the National Law Enforcement Officer of the year in addition to being chosen Vermont Law Officer of the year. He has won service awards from the Barre Elks Club for work in the Drug Awareness Program and has received citations and commendations for dedication to duty and in appreciation for his work as a DARE instructor from the City of Barre.

Sam and his wife, Shannon, live in Montpelier where they have resided since 1987. They have three adult children.

In 1810 Jefferson County, Vermont was established. In 1814 the name was changed to Washington County, renaming the County after George Washington. Washington County is approximately 695 square miles and is one of two Counties' (Washington and Lamoille) that are not bordered by another State or Canada. In 1820 there were 14,113 people in living in Washington County. The 2010 census found 59,534 people now to be living in the County. Montpelier is the Shire Town and is also the State Capital. The current State House is actual the 3rd, as the first two burned down.

Washington County's first jail was built into the dwelling erected by Montpelier's founder, Jacob Davis, shortly after his arrival as the first settler in 1787. That building was given to the County by his son Thomas Davis and was rebuilt in granite in 1832. Another jail was built in what is now known as Jail House common, at 24 Elm Street, Montpelier, Vt.

The Sheriff's Office currently has 10 full time Deputies, two Office Staff members, the Sheriff and many part time Deputies. The Office preforms its statutory functions of transporting prisoners, mental health workers and juveniles as well as serving civil process. The Office is also responsible for security at Criminal, Family, and the Civil Divisions in Washington County, as well as Supreme Court. The Office contracts with 10 towns with in the County for Motor Vehicle Patrol as well as preforming a multitude of security and traffic functions throughout the County.