BENNINGTON - A number of newly re-elected officials were sworn in during a ceremony at the Bennington Superior Courthouse on Friday.

Following his swearing-in by Colvin, Schmidt swore in sheriff's deputies who stood to the side of the courtroom in green uniforms, hands raised to tale the oath.

Plunkett, who has begun his 12th year as a Bennington County prosecutor, recalled one of the swearing-in ceremonies when he was relatively new in his career with the county. A picture of him was posted on the Banner website after the ceremony, he said, and a reporter later told Plunkett that someone had requested to buy the picture - one of the first photo purchase requests the newspaper had received.

"It was my mother," Plunkett laughed.

Schmidt was sworn in as sheriff for the fourth time and is beginning his 10th year in the post.

"It's been a great journey," he said. "Every year, we look to add new services and expand our [current] ones."

In his new term, he is hoping the Sheriff's Department can add another K-9 unit.

Additionally, Schmidt said the department hopes to renovate an abandoned building next to the headquarters off Route 7 for an indoor shooting range, a project he hopes to see completed by the end of his term. 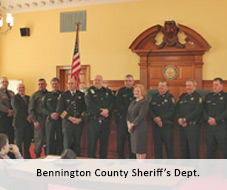