Sheriff Schmidt is pleased to announce that on Friday morning, May 31st shortly after 6 AM Deputies from the Bennington County Sheriff's Department, along with Bennington Police, the Vermont State Police and the Vermont Fish Wildlife Officers executed a search warrant on Murphy Lane in Pownal, Vermont looking for heroin.

In the course of the search law enforcement officers seized 2035 packets of Heroin, 39 Grams of Cocaine and Crack and $1417 dollars in cash and many items of paraphernalia. The street value of the seized heroin is estimated to be over $40,000.

Mr. George and Ms. Rowe were arrested are being charged in the Superior Court of Vermont, Bennington Criminal Division with:

Sheriff Schmidt is continuing his commitment to the county that this type of drug activity will not be tolerated, and he wants to thank Deputy Miller and Lt. Howard for their tireless effort on this investigation. Detective Sergeant, Lloyd Dean 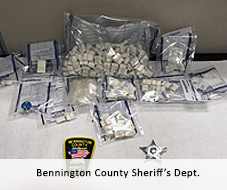